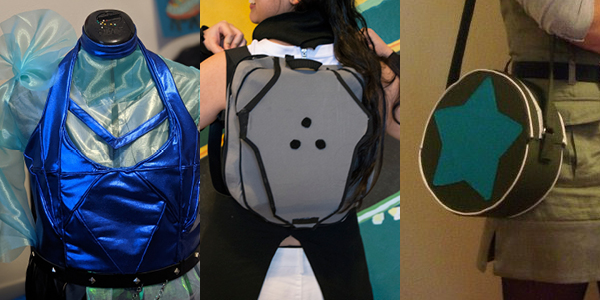 One of my cosplay goals for this year was to release a new tutorial post (and accompanying video) every quarter. Seeing as it’s the end of March, I’ve got one done just in time.

Considering I just learned this new technique to make my Seraphine cosplay, I thought I would share it with you!

If you’re more of a watcher than a reader, I have a video of this same tutorial!

Piping is a a strip of cording wrapped in bias tape. You can either buy pre-made piping or make it yourself! The benefit of making your own piping is that you get the exact fabric that you need, rather than settling for the limited colors the craft store has.

Piping can be used to finish edges of a sewn object while giving it a nice level of polish and dimension. One common use for piping is as a decorative finish for pillow cases. Other uses include purses, backpacks, and bodices like below! You can match the piping to the sewn object or use a complementary color to really make it pop!

How to make piping

*You can also do this by hand but I wouldn’t recommend it because it takes so long!

Bias tape are strips of fabric cut along the bias.

The bias grain of a piece of woven fabric, usually referred to simply as “the bias”, is any grain that falls between the straight and cross grains. When the grain is at 45 degrees to its warp and weft threads it is referred to as “true bias.”

That’s just a long-winded way of saying that it’s the 45º angle of the fabric.

To find your fabric’s bias, lay it flat, making note of the direction of the grain. Then, fold one corner of the fabric over to form a triangle, making it so that the side edge now aligns with the top edge like the picture below.

Iron this fold so that you get a nice crisp line going down the fabric.

Then, using your ruler and fabric chalk, and draw a line going down the fold line. Use your scissors or rotary cutter to cut along this line.

Next, you’ll mark where to cut the bias strips by marking lines parallel to this new edge you created. You’ll want the width to be wide enough to encase the cording. If you know what project you’ll be using it for and what the seam allowance is, it helps to cut them to the correct sizing beforehand. To figure out what that width is, use the formula below

In this case, since we already said that our cord width is 1/8″, the formula looks more like this:

So, if your seam allowance is 1/2″, your total width would come out to 1.25″. So you’ll need to cut strips 1.25″ wide to be able to fully encase your cording and have enough fabric for the seam allowance. (Disclaimer: the pictures below first start off with strips 1/2″ wide because I messed up. And then later on after realizing my error, I used 1″ strips. Just cut the strips to the dimensions you need for your project.)

There are a couple ways to go about cutting these strips.

After this, you’ll want to trim the edges of the bias strips so that they’re all right angles.

If you want to make one giant strip of piping, do this step. If you’re okay with lots of smaller strips, you can ignore this step. (When I made Seraphine, I opted for 2 long strips because I wanted to make sure it was long enough for my seams but not so long that it became unwieldy.)

Pin or clip the ends of two bias strips together—right sides together—so that they form a point like the picture above.

Don’t forget to check your thread tension before you start sewing! You can do this by using two pieces of scrap fabric the same as the one you’re using for the bias tape and stitch a straight line. I start with tension at 0 and work my way up. You can see how tension 0 was really wrong on the backside but tension 1 was just right. I’m using black thread so that you can easily see the stitching. Use a matching one to hide the stitches.

Then, stitch the two pieces together following a 45º angle. Once done, cut the excess fabric. Continue this for all the strips, making sure to follow the same direction each time.

Cording in hand, carefully pin it into the inside of your bias strips. I found using pins for this rather than clips was a little easier because I could get as close to the cording as possible. Once pinned, using a piping or zipper foot to stitch along the line of pins, right up against the cording. For this, I used an invisible zipper foot.

Congrats! You have now made piping.

How to Install Piping

Installing piping is very similar to installing bias tape if you’ve ever done it. With just a couple extra steps.

This step is really helpful if you are going to have lots of piping intersecting with one another. It’s also good to help not overwhelm your sewing machine. Carefully clip just the cording at the ends the same width as your seam allowance. You may have to undo a couple stitches to do so, but it’s worth it to make sure you don’t have lots of overlapping piping.

Stitch the piping to one side of the fabric.

Pin or clip the piping in place on the right side of the fabric. Line up the fabric edges together as shown. For this, we’ll be using this cute green and pink plaid fabric!

Using a zipper or piping presser foot, stitch the piping in place, making sure not to catch the cording. I actually messed up at one point and did catch the cording. (Do as I say, not as I do. You can see how that effects the final look later in another example.)

Sandwich the piping between the two fabric pieces.

Next, add the second piece of fabric right side down onto the piping. You should now have a little sandwich where the fabric is the bread and the piping is the yummy deli meat or veggies. (Can you tell it’s almost lunch time as I write this?) As a reminder, the piping should be touching the right sides of the fabric.

Stitch right next to the piping cording, again making sure not to catch it.

Turn the seam right side out and enjoy! You now have a lovely finished seam with piping. (I didn’t bother matching the plaid pattern, but if your fabric pattern is directional like this one, it’s definitely something to keep in mind!)

Installing piping around corners and curves

Yeah, that’s great for a straight stitch, but what about corners?

For corners, you’ll clip/pin it in place as normal along the straight edge, but when you meet the corner, carefully clip the bias tape (just the bias tape! not the cording) where just before the corner about the width of the seam allowance. Now, you should be able to bend the piping to match the other edge of the fabric.

Curves are fundamentally the same as corners, but you may have to clip the bias tape a little more dependent on how long/deep the curve is. For this one, the curve wasn’t too bad, so I just clipped it every couple inches.

You can see where I messed up making the piping and accidentally stitched over the cording. This wouldn’t be so bad if you had matching thread.

It helps to see techniques used in actual projects and not just squares of fabric. So here are some close-ups of Seraphine’s bodice that incorporates piping. You can see how it adds dimension to the piece!

If you have any questions or need any clarification, please let me know in the comments! You can also @ me on Twitter or DM me on Instagram. Let me know if you enjoyed this tutorial and if you’d like to see me do a specific sewing or crafting technique! I hope to do one of these per quarter!

One thought on “Tutorial: Make & Install Your Own Piping!”