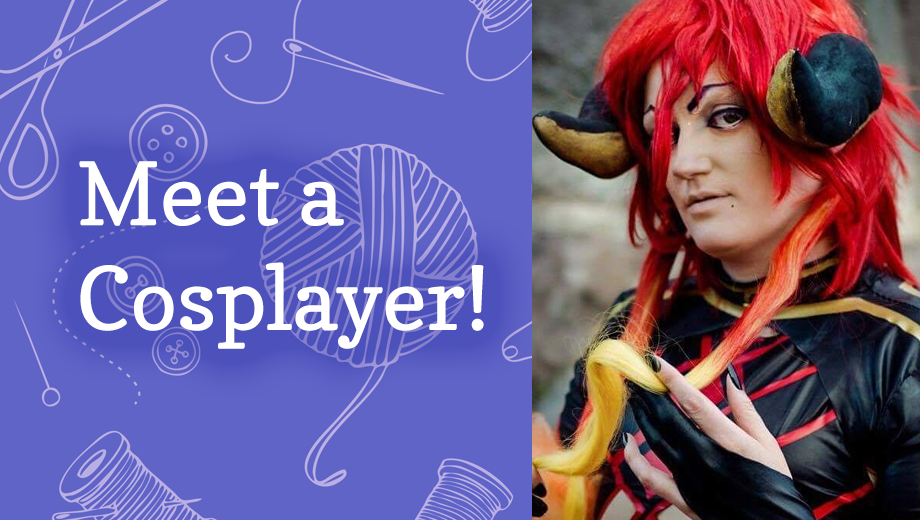 I met Sydney online through the Kumoricon Facebook group. She had posted to the group a picture of some Pokemon gijinka concept art asking if anyone was interested in joining her cosplay group for Kumoricon. There was only one female concept left and I (after lots of internal debate) jumped at the chance. I can say without a doubt that it was the best decision I made that whole month.

It’s led to some great online friendships and hopefully we’ll have some great fun and awesome photos once Kumoricon’s over! She’s been leading the group like a champ, arranging our meetup and scheduling a professional photographer and everything.

I got to meet Sydney very briefly when Jason and I were visiting Portland. Drisana (check back in two weeks for her chapter!) was hosting a cosplay work meetup at her house and Sydney came to work on parts of her Tuxedo Mask and Jolteon Paladin cosplays. I can’t wait to stay with her and Drisana over Kumoricon weekend! So much cosplay shenanigans in store.

Hometown: I grew up in Vancouver Washington…

Current city: … and I still live in Vancouver, Washington.

Q: How long have you’ve been cosplaying?

Q: What was your first ever cosplay and how old were you?

A: I was Tony Tony Chopper from One Piece. I think I was 12… I honestly don’t remember.

Q: What was the first con you ever attended?

A: Kumoricon 2009! At the time it was switching between Portland Oregon, and Vancouver Washington. It had a different location for a few years before I finally settled down.

Q: Who or what introduced you to cosplay?

A: I kinda found it on my own. Just curiosity really. As any anime fan does, when you want to find out when the next episode or season is released you go to Google, then within that I started to see people dressed up as these characters. I went deeper down the rabbit hole, and looked up what it was, and found out it was called cosplay, and that there were conventions. I instantly fell in love.

Q: What is your favorite cosplay you’ve ever made?

A: That is really hard to pick because at the time of wearing whatever new cosplay I had it was my favorite. I think my favorite memories in a cosplay happened in my Lavi cosplay from D.Gray-Man. I love the series and character, but looking back at the cosplay now, I cringe. I have increased my skill set since then, the cosplay is not very good, but I think I had the best memories in it (in actually remaking it). As far as some of my other favorites. I really like my Roy cosplay from the Fire Emblem series because of his cape… I fell in love with capes and I am always drawn to capes. Also my Loki Laevatein cosplay from Kamigami no Asobi, the character is just super sassy, I love acting like him. I like a lot of my cosplay for different reasons. I think that an upcoming cosplay I’m making currently, will probably become my favorite, it’s a secret though, but the character has a little bit of all of those aspects.

Q: What cosplay was the most difficult to make? What new techniques did you learn from it?

A: I think my Roy cosplay from Fire Emblem, was probably the hardest. It was the first time doing a lot of things. It was the first time making armor, capes, gloves, boot covers, and basically the entire cosplay. Also I had to make it in one month… that added a bit of stress. I think second place would be my King Armakan from Magi in his Djinn Equip form. That had a double set of wings… but that was the only real difficult part to it.

Q: What cosplays are you currently working on? When will you be debuting it/them?

A: This question… ok so there is a lot… For Kumoricon 2016, I am making Tuxedo Mask from Sailor Moon, and a Jolteon gijinka based on Sunset Dragon’s Dungeons and Dragons designs, I am also remaking my Lavi cosplay from D.Gray-Man. For Newcon PDX, I’m making Hakuryuu from Magi, and a witch design by an artist named Madi. For Sakuracon, I’m making Bonbori from Otome Youkai Zakuro, L’arachel from Fire Emblem: Sacred Stones, and a secret cosplay for the costume contest.

Q: What’s your one dream cosplay if budget/time/skill weren’t an issue?

Q: What do you like/dislike about the cosplay community?

A: Just all of the controversy in the community… also it’s gotten so popular lately which turned everything into a beauty contest. I want to reverse time and make it how it used to be. Not necessarily smaller or less popular, but we didn’t have to post signs like “cosplay is not consent” because that was not an issue. I do appreciate that people are standing up for those things, but it’s sad that it has to be addressed in the first place.

Q: Who are your cosplay idols?

A: I don’t think I really have any cosplay idols, I try to have the thought process of everyone being equal, I know it sounds weird, but I don’t want to idolize anyone because at the end of the day, they are just as weird as we are, and they are people too.

Q: Have you entered any contests? If so, how did you do? Would you do it again?

A: I haven’t entered many because it would always interfere with church, but now that the contests have started to be moved to different days I am excited to start entering more contests. I did pretty well with the contest I have entered so far, but there is always room for improvement.

Q: When you’re not working on a cosplay, what do you do with your free time?

A: What free time… just kidding, but I like to juggle, dance, eat food, watch anime, play video games, go out with friends. I also work so that sucks up a lot of time too.

Q: If you could give one tip to new cosplayers, what would it be?

A: Practice makes perfect. Also take advantage of the Internet, I was cosplaying during a time that didn’t have tutorials for costumes… it was rough.

If you want to follow Sydney’s work, check out all her different pages!

5 thoughts on “Meet a Cosplayer: Sydney AKA Cosparade”